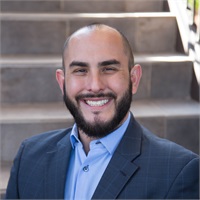 President and Registered Representative of Catalina Investments, Board Member of Grupo Constelacion

Born and raised in Tucson, Otto began his financial career in 2006. He graduated from the University of Arizona in 2007, and from his Master’s in Business Administration in 2011 from the University of Phoenix while working full time. Otto’s career as a professional in the financial industry has ranged from private banking, lending, and business consulting to financial planning and wealth management. As an Investment Advisor Representative, Otto is focused on understanding his client's comprehensive financial plans through a needs assessment process. His objective is to give peace of mind, help clients pursue financial success, and manage wealth preservation.

Otto has a strong belief in education and that something new can be learned every day. He continues to further his knowledge through reading, attending seminars, conferences, constant practice, and being a life student. He travels once a year at minimum to New York City to continue his due diligence with the firm’s Strategic Alliance Partners. Otto comes from a family of entrepreneurs from which he gained his positive energy, spirit, and work ethic.

Otto’s family has a restaurant in South Tucson that have been in business for over 30 years. He began helping at his family’s restaurant, El Merendero, since he was 9 years old and has been brought up in the philosophy that the client comes first, second, and third! Otto made a choice while attending the University of Arizona to not continue in the family business as finance and investing has always been an interest that blossomed into a passion. He began as a teller at Wells Fargo and climbed the corporate ladder to become a Registered Private Banker at the Wells Fargo Private Bank. The opportunity to join Catalina Wealth Management came for Otto in mid-2012. Shortly thereafter, he became an Executive President of the firm due to his business acumen and his drive to do the best for his clients. Otto was also instrumental in creating the subsidiaries of Pillar Insurance Group, CI Legacy, Friendly401k, and Grupo Constelacion.

Being involved in the community, Otto is a former board member of the Arizona Blind and Deaf Children's Foundation, a founding board member for the Assisted Living Network of Southern Arizona, sits on the finance committee of San Miguel High School, a board member of the Banner "All of Us" program, and has volunteered for Habitat for Humanity. Due to his involvement in the community, Otto received the Hispanic Chamber of Commerce's honor of being named their "40 Under 40 Man of the Year" in 2017! Otto and his family live in Tucson, AZ. Otto and his wife, Karina, have three beautiful daughters, Isabella, Victoria, and Regina. They enjoy spending as much time together as possible. His other hobbies include collecting Disney pins, traveling, and marketing.

Otto welcomes you as his guest and looks forward to helping you pursue your financial objectives!